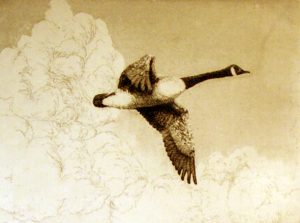 A phenomenon of glorious beauty, mystery, and magnificence that twice a year since the Ice Age some 18,000 years ago had swept across the length of the continent was about to be destroyed forever because the men who most of all coveted its preservation were unable to envisage the approaching disaster or to comprehend their own fatal part in it.

It all happened during the Great Depression that began in 1929, but, most of all, the greatest destroyer was that the shallow sloughs and lakes of the prairie pothole region had disappeared following about 10 years of reduced rainfall and seasons of persistent drought. Putting the finish touch on the problem, the onset of the Dust Bowl drought years began in 1930, which caused the duck population to plummet from 100 million to 20 million between 1930 and 1934.

In a few more years, nothing would have remained of the greatest of all field sports save the decayed ruins of duck hunting clubhouses, cabins, and shacks on many a marsh, swamp, lake, and bayou from Saskatchewan and Alberta to the rice fields of Arkansas and Louisiana, along with a few good duck-hunting books, magazines, and splendid pictures, and the wistful anecdotes told by the old timers vainly seeking a suitable recreation that had gone away.

Nevertheless, the Dust Bowl that for years had ravaged the north central states and the southwestern provinces in Canada was a blessing, though one in fearful disguise, for the waterfowl. It destroyed countless millions of birds, but by 1933 it had accomplished something that the U.S. Biological Survey and informed naturalists and sportsmen had been unable to do. By diminishing the flights of waterfowl ferociously, significantly, and swiftly, it attracted the attention of the least observant hunters and convinced them at last of the truly desperate conditions of the resource.

The Biological Survey had known the true situation for years and had sadly and diligently sought public support for regulations to drastically reduce the annual kill and also for means to save some of the remaining natural marsh areas and to restore some reasonable part of the 100 million acres destroyed by drainage and other enterprises.

The first step came in 1932 by cutting the shooting season from two and one-half months to 30 days and to eliminate baiting and the use of live decoys. These decisions nearly destroyed the Biological Survey.

A number of men who knew the situation from lifelong study of it and understood the ominous significance of this maneuver thought that the jig was up for waterfowl. It wasn’t a pretty prospect.

Nevertheless, in 1932, a land acquisition program was started, the purpose being to build a fabulous system of sanctuaries in this country composed of a total area of 7,500, 000 acres, with half of being completed by 1938, allowing the 1938 season to be lengthened.

However, if you want the main reason for the increased duck population from 1935 to 1938 and afterwards and the lengthening of the duck season, it is to be found in the circumstance that American waterfowlers generally gave their support to shooting regulations that were individually infuriating, but which resulted after 1934 in reducing the total number of ducks killed each year to much less than the total number of ducks hatched and reared.

After 1938, the years that followed were catalysts for conservation, eventually producing the Duck Stamp Act, National Wildlife Refuge expansions, the Pittman-Robertson Act, and Ducks Unlimited.

To some extent, this same scenario played out from 1959-1964, when during ferocious drought years, the duck population plummeted as did the number of waterfowlers. For the 1962 season, waterfowlers faced the most restrictive regulations in the history of waterfowl management. Those in the Mississippi Flyway were restricted to a 23-day season and a two-bird limit, with only one mallard allowed. Just four-million ducks in 1961 were harvested, the lowest number ever recorded before or since.

Nevertheless, the duck population bounced back in 1966. This resulted in the Mississippi Flyway having a 45-day duck season and five more days of shooting than in 1965. Four ducks (only two mallards) a day was the limit.

But for the here and now, to me, we are at a crossroad again, as a significant part of our country is suffering through drought conditions, with the estimated duck population taking a hit downward this year. Figures released in late August show total duck population estimates in spring 2022 declined 12 percent from the last recorded survey taken in 2019. Mallard populations saw a large decline, dropping to 7.2 million birds, down 23 percent from 2019.

Global warming has been occurring for nearly 12,000 years. We are living now in what is called the “Holocene” period of a warming interglacial cycle. In the last 800,000 years, there have been eleven interglacial periods. Interglacials represent about 20% of the past 800,000 years, and all evidence suggests many more years of interglacial warming ahead of us. One must keep in mind that CO2 concentrations have been increasing for the last 8,000 years, driven by land use changes due to deforestation and agriculture, and that the temperature is 1–2°C warmer than during the preindustrial period.

The long-term outlook for duck hunting in the years to come is that this warming trend will keep ducks further north, not having to come south, for they can get all the corn and beans they need up north as long as water doesn’t freeze up and the snow cover is minimal, while the breeding areas in Canada the Midwest will continue to dry up and thus reduce hatching numbers. No state in the Southland will suffer more than Louisiana as this warming continues, and Arkansas will not be too far behind.

And escalating commodity prices will mean more wetlands in Canada and the north central states will be converted to farmland in the future. In addition, we have probably reached our ability to develop more refuges, so that will probably not be a factor to counterbalance the loss of wetlands. On the other hand, as the dry years go by, more nesting and breeding will occur in the Antarctica as the ice melts and tundra and wetlands return to the area and even boreal forests.

The drought years proved a number of things of great importance to waterfowlers and to those who establish bag limits and season lengths. Among others, the experience showed the utter fallacy of the statement formerly so often advanced even today that restrictions on shooting do not increase the supply of game.

To sum it up, with the situations that exist today and will continue into the future, the best historical information we have indicates that waterfowl populations can only be preserved by regulating the number of shooting days and bag limit. We should rejoice that this has been effective in the past and that the means is within reach of our hands and will, and we should not close our eyes to it.

To me, we should, for the 2022-23 season, reduce the duck season to 45 days and the bag limit to four ducks, with three being mallards and only one or no hen. If we do, in the future, maybe we will have some fabulous years, but, as always, we will have some lean years, but most of all, we will have a duck-hunting season and hopefully a future keeping in mind that the coming years may mandate we have a 30-day season and two ducks.

To do so will be difficult as we are in our 25th year of 60 days and 6 ducks. Nevertheless, we need to make concessions now to protect our stirring concerns over the potential loss of a key piece of America’s culture.

How many generations have told their sons, “You know, boys, y’all will never have the opportunity to see what I saw as a kid.” With each challenging season, more hunters will leave our beloved sport!