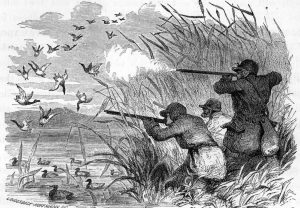 Four hundred years ago with the coming of the Europeans, ducks were like the grains of sand along the shoreline—they were innumerable. We, of today, can have no comprehension of the tremendous numbers that existed in the olden and golden days. When the settlement of America was begun, the number of waterfowl was beyond computation, and the statements made by those who wrote about the game of the country at that time seem utterly incredible when recited today.

However, it was a time when dark clouds of coming storms obscured the northern sky and Boreas blew wildly and chilly. The hunter, standing on the river shore at sunrise, saw the sky covered by clouds of birds, and in the early days the discharge of a musket near a marshy pool caused the whole marsh to rise in a mass that blotted out the sky.  In the land of abundance, Capt. John Smith, in his 1608 account of his journey to the Pamunkee Indians, reported that “A hundred and forty-eight fowls the President Anthony Bagnall and Seriegent Pising did kill at three shoots.”

Sir Samuel Argal (1624) stated that in Virginia there were fowl in abundance, such as “Swans, Brant, Geese, Turkeys, Cranes and Ducks.” William Strachey (1610) said, in his True Declaration of Virginia: “The Turkyes of that Countrie are great, and fat, and exceeding in plentie. The rivers from August, or September, till February, are covered with flocks of Wildfoule; as swannes, geese, ducke, mallard, teal, wigeons, hearons, bitterns, curlewes, godwights, plovers, snipes, dottrels, cormorants, in such abundance as are not in all the world to be equalled.”

Colonel Norwood (1649) stated that great flights of fowl frequented an island on which he was cast away off the coast of Virginia. John Clayton (1688), in a letter to the Royal Society, giving accounts of “several observables in Virginia,” said that “Wild Geese and Brant in winter came in mighty flocks, with wild Ducks innumerable.”

Edward Williams, writing of “Virginia,” stated that waterfowl in their seasons were innumerable. Thomas Glover (1676) said that on the bay and rivers “feed so many wild fowl as in winter time they do in some places cover the water for two miles.”

The above accounts refer mainly to the southern and middle portions of our Atlantic seaboard. Narratives of the Dutch, who first settled New Netherlands (now part of New York, New Jersey, and the region along the Hudson), gave evidence of the vast numbers of waterfowl and game birds found there during the early days of settlement.

Johannes de Laet (1633) said, “Innumerable birds are also found here, both large and small, those that frequent the rivers and lakes, as well as the forests, and possess plumage of great elegance and variety of colors.” Nicolaes van Wassenaer (1624) wrote, “In their waters are all sorts of fowls, such as cranes, bitterns, swans, geese, ducks, widgeons, wild geese.” Rev. Johannes Megapolensis, Jr. (1644), asserted, “We have here, too, a great number of all kinds of fowl which sport upon the river in thousands in the spring of the year, and again in the autumn fly away in flocks, so that in the morning and evening any one may stand ready with his gun before his house and shoot them as they fly past.”

David Pieterszoon de Vries (1642) speaks of great quantities of different kinds of “Geese, Curlews, Snipe, Gulls and many shore birds. Turtle Doves (Passenger Pigeons) were so numerous that the light could hardly be discerned where they flew, and other species of birds in large numbers.”

Hubbard (1680) said that on Long Island there was “great store of wildfowl, such as Turkeys, Heath Hens, Quail, Partridges, Pigeons, Cranes, Geese of several sorts. Brant, Ducks, Widgeons, Teal and divers others.”

Martin Pring (1603), who visited the northern part of Virginia (New England and adjacent lands), stated that there was “great store” of river and sea fowl.

In Archer’s account of Gosnold’s voyage, we find the statement that about May 22, 1602, the company reached an island, south of Cape Cod, which they called Martha’s Vineyard, where they found waterfowl breeding in abundance. This island evidently was that now known as “No Man’s Land.” In Brereton’s account of Gosnold’s voyage (1602) there is a description of a freshwater lake (which some later historians have located on the island now known as Martha’s Vineyard), in which stood a small island that was “exceedingly frequented with all sorts of fowls,” some of which bred low on the banks, and others on low trees about the lake in great abundance, the young of which the explorers took and ate.

In the various historical collections, there may be found fragmentary accounts of the birds of Massachusetts, Higginson (1630) said: “Fowles of the Aire are plentifull here. In Winter time, this Countrey doth abound with wild Geese, wild Duckes, and other Sea Fowle, that a great part of the winter the Planters have eaten nothing but roast meat of diners Fowles which they have killed.”

Morton (1632), who was a “fowler,” also speaks of the numerous quantities of waterfowl, shore birds, cranes, grouse, partridges, and quail in New England. He asserted that he often had a thousand geese before the muzzle of his gun, and that the feathers of the geese that he killed in a short time paid for all the powder and shot that he would use in a year.

Wood (1629-34) also writes of the large numbers of turkeys, cranes, and other large birds, as well as pigeons, shore birds and waterfowl. Wood asserted that the marsh at the mouth of the Saugus River near Lynn was crowded with creeks, where lay “great stores of Geese and other Ducks.”

These writers refer mainly to the region about Boston harbor and Massachusetts Bay, where the first settlements were made. Lewis says of Lynn that at the time of the first settlement (1630) the ponds and streams were filled with fish, and that the harbor was covered with seafowl, which laid their eggs on the rocks and sands of the shores. He said that fifty ducks were sometimes killed at one shot.

In Obadiah Turner’s journal, July 28, 1630, relating to the first settlement of Lynn, we find the following: “Of birdes wee saw great store . . . manie of which we knew not ye names. But we are of a truth in a paradise of those moving things yet be good for foode.” In the same volume, under date of 1638, it is stated: “Upon ye beach they spied great multitudes of birdes of manie kindes, they being there to pick up ye wormes and little fishes. They have long bills which they thrust into ye little holes in ye sand and pull up ye fat wormes with great relish. They lay eggs in ye sand and ye heate of ye sun being upon them they speedily hatch, and ye little birdes betake themselves to feeding. Ye beach birdes are verrie shy and quick a-wing, but our sportsmen, nevertheless, do bring down great plentie for their own use and if need to supply their plantations.”

In an account of Levett’s voyage to New England (1623), he mentioned “great plenty” of waterfowl at a pool nine miles below the mouth of the Saco. He said, “In this place there is a world of fowl,” and also speaks of “much fowl” in other places on the coast and islands.

In Hosier’s narrative of Waymouth’s voyage to the coast of Maine, in 1605, he recorded visits to Monhegan Island and St. Georges Isles, and in both places saw “much fowl of divers kinds” breeding. He gives a list of birds, and states that there are “many other fowls in flocks, unknown.”

Sir Ferdinando Gorges (1658) states that there were plenty of fish and fowl for the “sustentation of the settlers, so that they could not say (according to the manner of their living) they wanted anything nature did require.”

The Baron de Lahontan (May 28, 1687) speaks of the immense numbers of geese, ducks, and teal, with an “infinity of other fowl,” which he found at Lake Champlain, and states that his party ate nothing but waterfowl there for fifteen days.

The enormous numbers of game birds, which formed a staple article of food for settlers, were looked upon as a valuable asset in the new country, and the abundance of fowl was fully set forth in the publications destined for the eyes of presumptive immigrants. The President and Council of New England (1622), setting forth the advantages of New England as a place of residence, spoke of the country as abounding with diversity of wildfowl, as “Turkeys, Partridges, Swans, Wild Geese, wild Ducks and many Doves.”

Much more evidence might be given regarding the great numbers of waterfowl in America in the early days, but sufficient proof has been cited to show the reader the abundance of waterfowl in this country at the time of its discovery and during its earliest settlements.

Nevertheless, as man multiplied, the change in nature’s plan spread out as oil upon the water, until today we have an entirely different continent, from a natural standpoint. Its decline began almost immediately.

When the white man set foot on this continent, he started to create a change. Even the early colonists born in America asserted that there were not nearly so many birds “at the present time” (1748) as there were when they were children (1670-90), and that the decrease of these birds was visible. They said that their fathers also had complained of this, saying that in their childhood the bays, rivers, and brooks were quite covered with all sorts of waterfowl.

At Swedesboro, New Sweden (now New Jersey) (1748), an old timer said, “There was sometimes not a single duck to be seen.” He was informed that sixty or seventy years earlier a person could kill eighty ducks in a morning, “but at present,” he said, “You frequently wait in vain for a single one.”

The old timers said that the cause of this diminution was not difficult to find, for after the arrival of great crowds of Europeans the country became well populated, the woods had been cut down, and the people had by hunting and shooting, partly exterminated the birds and partly frightened them away. There were no regulations or laws to prevent the destruction of birds at any season of the year, so they were slaughtered, and, had any existed, the spirit of freedom prevailing in the country was such that they would not have been obeyed.

The diminution of game progressed faster along the coast, in the river valleys and about the lake shores than elsewhere, for there settlement first began, while in the unsettled interior of the north and west the birds were still nearly as plentiful as ever. Up to the early part of the nineteenth century the great interior of the northwest beyond the Great Lakes and in Canada was not only unsettled, but unexplored. Therefore, notwithstanding the great decrease of the resident game birds along the Atlantic coast for three centuries after the discovery of America, the waterfowl, shore birds, and game birds still bred in almost undiminished numbers in the unexplored interior of the United States, and they still appeared in vast numbers in their migrations, sweeping in clouds over the interior, and moving in great flocks up and down the Atlantic seaboard. It was the unsettled wilderness, and the wilderness alone, which so far had maintained the supply, but when, in the latter part of the nineteenth century, railroads began to extend throughout the great west and northwest, a rapid extermination of game commenced, such as was never known before in the world’s history. The railroads carried settlers into the wilderness and opened to them the markets of the east.

After reading this interesting account, it is not hard to visualize the march of an oncoming civilization, crowding and pushing nature’s living birds and animals farther and farther from the face of this land.