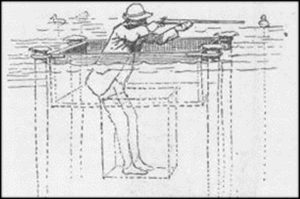 The Illinois River valley historically has been one of the most important migration areas for waterfowl in the United States, and probably no better place existed in the country for the spring shooting of ducks on their way from their winter resorts in the sunny wetlands of the South to their love retreat in Canada than that offered on the Illinois River. An example of the dense concentration of waterfowl in the valley was given by Aldo Leopold, one of America’s fore-most conservationists, who reported that three million ducks were observed resting at both Crane Lake and Clear Lake near Havana during the late 1920s.

From time immemorial in the olden days, the vast submerged lands, some 30 or more miles down the Illinois River from Peoria and just north of Havana, had been patronized by waterfowl as a half-way house, especially canvasbacks and mallards. Adjacent to and on both sides of the river, there were a number of natural lakes and ponds, which in the time of floods became connected and were covered into an immense sea, while the backwater of the overflow stretched forth on both sides of the river’s banks, which covered the bottom farmlands, and was not arrested until it reached the bluffs, which rose precipitously a dozen miles away.

This section for many years, and especially that in the immediate vicinity of Clear Lake, had been a famous ducking ground. Comparatively speaking, Clear Lake was the Havre de Grace of the West, where wild celery and wild rice grew in great profusion, and where for a brief period every spring during flooding the royal canvasback and his prime minister the redhead came to hold their court and exact homage of a web-footed retinue, which included every variety of the waterfowl families, from the stately swan to the diminutive teal.

As Clear Lake was not in the vicinity of any town, the shooting, therefore, was not accessible even to the people of Illinois, much less to strangers. The nearest place where one could get accommodation was at Liverpool, on the west bank of the river some six miles downstream, and this was too far from the lake to journey to and from every day. The means of ac-accommodations other than camping was renting a cabin flatboat, where one could moor it near the shooting grounds. They were very common on the river, being used as a home for net fishermen during the summer months. Flooding of the river and resultant overflow of fields and forests occurred quite frequently in the spring from the snow melt further north. The rising water flooded first the meadows and marshlands and then encroached on the timber. Then came the fowl, first being teal and swans. Then came the canvasbacks and redheads to Clear Lake and other nearby lakes. These two were followed by a retinue of geese, mallards, broadbills, sprigs, gray ducks, wood ducks, scaup ducks, and widgeon. Usually by the second day of arrival, the mallards, sprigs, gray ducks and wood ducks retired into the timber and fed on acorns, while the bluebills and scaup ducks sought shelter in the open pockets of the lakes and ponds and the teal went to the willows, leaving the canvasbacks and redheads the sole occupants of the open water.

Shooting done by Illinois gunners was either jump shooting, timber shooting, or lake shooting. In timber shooting, waterfowl were shot either from blinds made in the branches of submerged willows, or, before sink boxes were outlawed, from sink boxes located in the open water of the lakes. The boxes were constructed to hold the gunner while in a standing position, and by means of four long stout poles firmly planted in the mud that were held down almost to the surface of the water. This contrivance, of course, could only be employed in waters where there was no tide or where waves became too big during a strong wind. The decoys were anchored in a circle around the box. A “tender” was required, a man in a boat to pick up the dead ducks, which would drift away with the current and the wind if not retrieved. The best bags of canvasbacks and redheads made in the West were secured from the sink box, although the birds that first came from the South also readily approached the blinds along the shores.

Timber shooting at mallards was distinctly a Western sport and was only attainable when the forest lands were submerged by the spring and autumn freshets. In this kind of shooting, half a dozen wooden decoys or live decoys were found to be sufficient, and some hunters used a duck call, but neither decoys nor a duck call was necessary.

The bags made by sink box or timber shooting by an expert shooter sometimes exceeded one hundred. [Harper’s Weekly, April 18, 1885.]