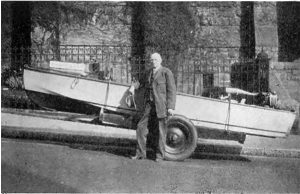 FROM MARKET HUNTER TO GAME WARDEN

If we of the present generation could now enjoy such duck shooting on the marshes and along the sloughs as the old timers had when they were young what a time we would have. Let’s peek back into the 1870s, 1880s and 1890s when California was a “Sportsmen’s Paradise” and take a look at one of the most prolific market hunters during this time when the lakes, rivers, marshes, sloughs, and bays reflected the glimmering wings of millions of ducks, geese, and shore birds, and with very little trouble or expense one could go afield or astream and within a radius of 50 miles of San Francisco and in a few hours return with a well-filled bag.

The “tools of the craft” at that time were muzzleloading shotguns and the reputation of the “hunter” depended upon the number of waterfowl and shorebirds he killed. During the pioneer days and even as late as the 1890s game of all species and classes were killed without regard to season, number, size, or sex and were commercialized for dollars and cents in the open markets.

Walter R. Welch, the writer whose writings will occur below, was born in Olema, Marin County. In 1867, the family moved to a ranch called “Half Moon Bay,” on the coast side of San Mateo County and stayed in California, and ever since he was able to “tote” a gun he never missed an opportunity to be afield or astream hunting.

He became afflicted with “huntitis” and “fishitis” at the age of about eight years and clearly and distinctly did he recall spending many a moonlit night during the late fall in the early 1870s seated in a duck shooting blind on the shore of the lower San Francisco Bay east of Palo Alto. As evening approached and night drew on flock after flock, containing thousands of ducks and gaggles of geese by the hundreds, were to be seen on all sides winging their ways to the grain fields in the vicinity of where are now located the towns of Mayfield, Palo Alto, Menlo Park, and Redwood City.

From the mudflats and marshlands bordering the bay shore came the quack of ducks, the honk of geese and cranes, the call of the willet and curlew, the whistle of plover, snipe, and shore birds, and the cackle of rails by the thousands upon thousands, while in the grain fields could be seen the flash and heard the report of every kind of “shooting iron” from the old smooth-bore army musket with its cap the size of a small plug hat and its iron ramrod to the 10-gauge muzzleloading shotgun loaded with five drams of black powder and one and one-half ounces shot. While he didn’t remember the exact number of ducks and geese he bagged that night, he had all he could carry home.

He had arrived at the Sacramento River where the two found the levees had been broken by the high water of the previous year, and that the whole country known as Yolo Basin and the Delta section had been overflowed. As the conditions were ideal for waterfowl of all species, the countryside was alive with thousands, rather, millions of ducks, geese, and every variety of shore birds. During the 1870s, the marshes surrounding the San Francisco Bay were still practically in their virgin condition. Only limited attempts had been made to reclaim them. When the settlers arrived in the 1850s, the marshes were in pristine condition and the sky was almost darkened from waterfowl. This was in an era when wheat and hay were grown along the Bay and waterfowl had no fear of man. However, by the 1870s, farmers had cleared the oaks from the land and planted grains-wheat and barley along with hay. Due to the increase in the number of market hunters, they became much more wary as market hunter shot them in the fall, winter, and spring

Being possessed of an insatiable desire to be afield with gun, during the late seventies, I secured a small sloop for use as a houseboat, and having an old market hunter for a partner, I entered the vocation of hunting ducks, geese, and shore birds on the bay and rivers for market and also grebe for their skins and seal for their oil and skins.

In “flight duck shooting” on the river, it was no unusual to empty the 200 shells by noon, and to retrieve from 50 to 100 ducks as a morning’s shoot from the tule splitter. The average load for the 4 gauge shotgun was 20 drams of powder and 6 ounces of shot.

In hunting ducks and shore birds on the bay, the flocks were worked with the shooting done from the scull boat. Three guns were carried in the scull boat, namely, the 12 gauge, 10 gauge, and 4 gauge shotguns. Generally the shooting was done with the 10 gauge, the 4 gauge being reserved for a “big shot” at a large flock of ducks, and the 12 gauge to shoot the cripples.

Frequently, shots were made from the scull boat that resulted in a bag of from 50 to 100 birds. My best show with the 10-gauge resulted in a bag of 38 teal, while my best shot with the 4 gauge netted me a bag of 67 mixed ducks. My partner’s best shot with a discharge of one barrel of the 4 gauge was a bag of 89 mixed ducks, and a bag of 120 mixed ducks as the result of a discharge of both barrels of the 4 gauge. “Big shots” at shore birds were generally secured by the use of the scull boat along the bay shore at high tide. The 10 gauge was used to make these shots and a mixed bag, consisting of from 75 to 100 willet, curlew, dowitcher, plover, and other shore birds was not unusual as the result of the discharge of both barrels.

During the seventies, eighties, and nineties, deer, quail and rabbits were shot and trapped by market hunters in all of the peninsular counties, and in the counties bordering on the San Francisco Bay as well as in other sections of the state. It is safe to say that during these years thousands of deer and upwards of 200,000 quail and a million ducks, geese, and shore birds, were annually sold in the open markets within the state. During the seventies and eighties, the principal market hunters in the San Joaquin and Sacramento River sections were Joe Sharp, Hermann Reed, Jim Sutten, the Lambert Brothers, “French Pete,” and “Butcher Bill,” and in the upper San Francisco Bay region Peter Petersen (Pete, the Hunter), George (Plug) Littlejohn, Charles (Charley Pikin) Petersen, Louis Werder, Charley Kee (Chiney Charley), Tom Redman, and Thomas (Coal Oil Tommy) Wilson, were the recognized market hunters.

During the late seventies and early eighties, Hart and Goodwin and George H. Pitts and Company were the principal wholesale and retail dealers in wild game in San Francisco. Hart and Goodwin’s place of business was located in the old California Market and that of George H. Pitts and Company at Clay and Sansome streets. To these markets most of the market hunters consigned their game and paid a commission, usually 10 per cent, for its sale.

The average price received by the market hunters for their ducks during the seventies and eighties ranged from $2.50 to $3 per dozen for “cans” (canvasbacks) and mallards; $1.75 to $2 per dozen for “sprig” (pintails); $ 1.25 to $1.50 per dozen for small ducks, widgeon, gadwall (grey duck ), shovelers (spooneys), greater and lesser scaup (blue bills), ruddy duck (wire tails and spatters), buffle-head (butterballs), golden eye (brownies and whistlers), and $1 to $1.75 for greenwing and cinnamon teal. White geese, brant, “speckled breast” and grey geese ranged from $1 to $3.50 per dozen, and Canada geese (honkers), swan and sandhill cranes from $4 to $6 per dozen. Bittern, blue and night heron, curlew, plover, willet, godwit, dowitcher, rail, yellowlegs, sandpipers, and other shore birds from 50 cents to $1.50 per dozen. Grebe skins and seal skins brought from 75 cents to $2 each, and seal oil 75 cents per gallon.

The market hunters sacked their game and shipped it to the markets via river steamers and trains. Upon arrival in the markets, the game was sorted out and the various species placed in piles on the floor of the markets and hung in pairs and bunches on the hooks of the game stalls. Early each morning during the game season great numbers of peddlers, retail game dealers, restaurant and hotel keepers assembled at the markets and bought the game at the lowest price possible for resale. By seven o’clock in the morning, the peddlers were offering game for sale by walking through the streets of the city with a back load of ducks and geese crying—”Wild game! Wild game!”

While there was something of adventure, there was not much real excitement in the life of the market duck hunter. It was all in the day’s work, and of such nature as to remove all sense of sportsmanship. Under the unwritten law that prevailed among the market hunters, the shooting began at daylight and was continued until sunset as suited the pleasure of the hunter, the object being to kill as much game and as economically as possible. In those days, quail and deer were the only birds and animals protected by law, and then only during a short-closed season. As the duck season opened September 1st and closed March 1st, we would begin shooting ducks on the opening date and continue duck hunting until the close of the season, when we would begin hunting shorebirds and grebe. This we would continue until about the middle of April, when we would begin to hunt seal for their oil and skins, which found ready sale at the tanneries at Redwood City.

About 1885, I gave up market hunting and entered other vocations, but it was not until about 1892 that there was any perceptible decrease in the supply of waterfowl and other wildlife in this state became noticeable. It was not until 1900 was any real effort for the enactment of laws for the better protection and conservation of game undertaken.

It was then he gave up market hunting and became a county and state game warden and conservationist. It was said, “He is a most earnest and strenuous advocate of game preservation, and is adept in everything legal and technical, that goes into making of good laws and their enforcement. We have all too great a need in this state of more officer-sportsmen like him. He is by inclination and practice a genuine sportsman and a friend of game protection.”