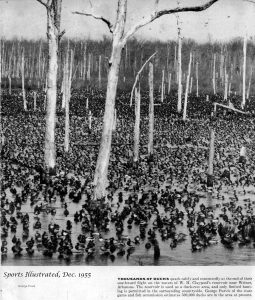 Aldo Leopold, the famous conservationist and father of wildlife ecology, said: “when we see land as a community to which we belong, we may begin to use it with love and respect.”

Wallace Claypool would be the EPITOME of that statement.

He knew that being a duck hunter was not just about hunting, SO HIS DREAM WAS to be a true steward of the land and leave a legacy behind him. he would engage almost his entire life into conservation with unwavering passion and gratitude.

He did more than anyone in northeast Arkansas in putting Weiner on the same footing with Stuttgart as far as ducks were concerned. He did it out of his own pocket, spending a fortune on dikes, water, crops, and enforcement, spending some $10,000.00 each year.”

Claypool started his project in 1941, with construction being completed by the fall of 1942. 1,351 acres were devoted to the duck reservoir, 800 acres of which was under water contained by levees Only five shooting areas existed in the Weiner area then, and at the end of 1955 there were over 30.

By 1948, it was a common sight to see a quarter of a million ducks on Wild Acres. Conservation leaders from different parts of the nation came to marvel at Claypool’s reservoir. They couldn’t understand how a private citizen could do so much for waterfowl in such a short period of time.

In the early years of 1950s, it was estimated that Wild Acres, at times, had close to a half million ducks and this together with the large concentrations at other reservoirs and ponds in the area added up to the proposition that Weiner was the “New Duck Capital of the World” in 1954.

It was then Claypool realized that Wild Acres had fulfilled his dream a dream that required a dozen years of exhaustive work and planning to bring to fruition a dream that made Poinsett County a duck-hunter’s paradise and a dream that made Weiner the New Duck Capital of the World.

Claypool allowed shooting at Wild Acres to begin at 8:00 a.m. on Wednesday, Saturday, and Sunday, and even when shooting was slow which was seldom no shooting was allowed in the afternoon.

Control of water and prevention of “burn out” shooting was the answer according to Claypool thus giving the ducks a chance to rest and remain happy with their environment. By this, Claypool demonstrated that ducks could be held for a long time through creation of natural habitat close to feeding grounds and through insistence on controlled gunning. He was a strong advocate of half-day shooting. He believed that ducks should be given more time to feed in safety in the afternoon. He wrote hundreds of Set featured image 2  letters pointing out the evils of late afternoon shooting.

OVER THE YEARS State and federal conservationists came to Wild Acres. They marveled at what he had done. It was printed in a newspaper “With Claypool showing the way the Arkansas Game and Fish commission created a number of public duck shooting projects in East Arkansas”

For the four-million viewers who saw Dave Garroway’s Wide Wide World’s live TV nationwide broadcast on December 23, 1956, it is etched in our memory forever—a magical moment frozen in time and captured in our memory bank It was also an epochal transition moment, giving us one last view into what it was like in the olden and golden days and what it is like today when everyone asks where are the ducks?

Through his conservation effort and management foresight the life-long dream of WALLACE Claypool was realized. It required YEARS of exhaustive work and planning to bring Wild Acres to fruition.”

Today, the legend of Wallace Claypool lives on because Wild Acres still attracts ducks due to the effort put forth by the four deceased owners and their offsprings in upholding the standards and rules that Claypool established and believed so strongly in.

In closing, I hope to say that Wild Acres was one of the wonders of America during the middle and late 1940s and first nine years of the 195os. No place else on earth could ducks be seen blackening out the sky when rising from the reservoir and be heard in such profusion, or go into the timber before daybreak and listen to the chatter of great rafts of ducks on the water or watch them as they soared gracefully over the treetops with whistling wings, and see the brilliant colors of their heads, necks and wings from the reflection of the morning sun that was living to so many waterfowlers. 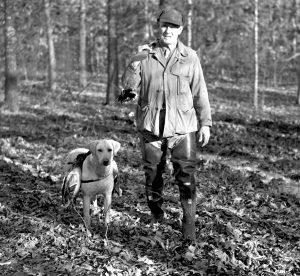