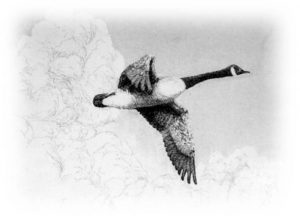 The greatest harbinger of autumn’s arrival, in the distance, faring so easily along their aerial ways, comes the wild clangor of clarions, wild and musical, shouting to each other, declaring the march of battalions of geese winging southward on the wild winds of the north through the soft arms and solemn silence of the night. How pleasant are the voices, clear as bugles, of these friendly messengers, bringing tidings of Autumn to come, and we rejoice that they have come again. Listen as they hail you from the sky. How I wish I could fly with them!

Watching them as they soar through the sky so much speedier than the clouds drifting about them, we are aware that the clouds seem to stand still as we verify by their shadows on the ground, appearing to lie motionless, with the fluttering shadows of the geese plunging into them on this side, then, lost for an instant in the blue dimness, emerging on that side with the same untiring beat of ethereal wings.

The well-disciplined voyagers are in perfect self-control as they obey the clarion call of their leader at the apex of the cleaving triangle acting as a pathmaker through the air whose broad wings beat the air with steady and majestic strokes. In the form of a gigantic V, each has a clear view ahead and below. They fly in response to the leader’s clarion note as it rings down the feathered ranks. Ever onward they go, steadily pursuing their course until a sanctuary is reached when their flight is over and the newcomers rest among earlier flocks, who dawdle contently in the grain fields as if they care to seek no place more welcoming.

Then comes another flock, rapidly and cautiously approaching in early daylight, as they pass in review before the others, with big wings advancing with mechanical consistency and their white collars and lustrous plumage sparkling from the sun. They show their joy at the likelihood of a pause in their long flight by a tremendous hubbub as each prattles and honks in many different keys. Now the old gander in the lead quickly cups his wings and followed by the entire flock descends in a long decent until they land with the others, and their mission is accomplished.

The prattle is immediately renewed with fresh gusto and continues with measured lessening energy until the excitement having passed they waddle peacefully on the ground conversing in ordinary tones. Occasionally, one scolds another with an endless array of acrimonious outcry.

Our guide surveys the golden fields with the glass, inspecting every promising spot, every feeding ground where the geese might gather. “I can see them in the distance, feeding and preening. This is the field we will put out our decoys and hunt tomorrow,” he declares.

As night arrives, with its golden sheen fading across the bountiful fields, the supper bell rings. Afterward, it’s off to the sitting room, when, amongst thickening clouds from a dozen meerschaums in full blast, a spirited and wide-ranging discussion ensues upon the relative virtues of guns, decoys, dogs, blinds and gear of all descriptions, with an occasional excursion into the realms of natural history where idiosyncrasies of waterfowl in general, their method and strength of flight, their canniness in eluding decoys, their favorite food, etc., etc., are dwelt upon at great length by all in attendance.

Nothing but enthusiasm greets us as each recollects a time that has passed and gone forever, unaware of the looming hour of midnight. Soon thereafter, everyone ventures into the land of dreams except me. In the darkness, nothing is heard, save now and then the hoot of an owl.

Filled with the eagerness of youth anticipating his first hunt, a hunter’s moon greets me, rising from the east, so high, so yellow it hangs. With no warning of a storm in sight, I admire its beauty, because life holds few pleasures to equal such glimpses. Truly, there is magic in it!

In the tranquil air above, barely is heard a distant sound; at first low, rising and falling, then gradually becoming more  Nearer and nearer it comes till it fills the air all around, then passing on, wanes and grows fainter, til eventually the sound is lost. The ducks are flying, appearing as dark fleeting flecks in the moonlit sky.

Not a snore is heard within the cabin. But then the aroma of steaming coffee, together with the song of the fry pan, arouses me. Then there are muffled sounds and whimpers, a yawn or two, then the faint sound of footsteps. Voices are heard. Some are busy passing in and out at the door loading their hunting gear. Soon the invitation to breakfast is heard, and hastily eaten.

On the skyline in the east lies a line of gray, which gradually increases and brings twilight where all before was darkness. In the distance, the silhouettes of tree trunks are seen standing like apparitions reaching out undistinguishable arms as if feeling their way through darkness.

Arranging the decoys, the once twinkling stars are fading now, and day approaches as sunlight has expanded itself over all the heavens, while in the east streaky sky has blushed to deep red and the richest gold. To the west, the moon lingers, resisting the intruding daylight. Looking again toward the east, the brim of the sun appears over the crest and a stray ray of pale sunlight strikes the decoy Judases.

As we breathe the clear, fresh morning air, my hunting buddy fervently echoes, “The time has come.” And we, who have labored through the summer with the hope of reward among the southbound waterfowl, are about to be amply rewarded.

We are possessed by a welcomed feeling of exhilaration, which is soon amplified by the sight, far aloft in majestic flight, of a dim wedge moving progressively onward, heading our way. It occurs to me that they must have a commander, and that the commander has the power of communicating his orders instantaneously to the whole flock. They send an answering “honk” to the greeting call from our vociferous guide, who pokes his gooselike neck from his layout blind, knowing as well as we that he is in for a morning sport.

We shrink down, grasping our fowling pieces. Now begins the anxious time. They may come or they may not. Now–now–they serve. They seem to obey some unknown signal of command, and we no more know what that the signal is. Immediately, our guide gives a shrill series of honks. Now they wheel around and he stops his calling. So sure as they turn off, he pipes up and the leader steers our way. As long as they continue toward us, he doesn’t “say a word.” We move not a muscle, but shake with anxious excitement.

Here they are, right in front of us, with extended beating wings, forming themselves in a variety of figures while inspecting the decoys, each unconscious of the reception awaiting them. How strange it is that they don’t see us. How pretty they look. Heck, if I don’t think I could catch one. Then they flare in confusion from some suspected or discovered danger.

“Take ’em!” comes the command from the guide.

And up we spring like a jack in the box or as mushrooms after a summer rain. Nine wisps of gray smoke curl up from the greeting committee, marking the final moment of our expectations. From the leaded pellets, six geese drop from the flock, each striking the ground with a sounding thud.

The remaining birds go onward with resolute rapid wing beats, while the reloaded guns thunder and harmless shots fly behind them. The ones in the rear indicate by rapid wing beats the severity of their situation, while the yellow rays of the sun clothe them gently as though in mourning at their fate.

Now we gather the dead, reload our guns, swivel down into our blinds, and go through the same routine and excitement of alternate doubt and certainty. Often, just as they get almost within range, they don’t like the looks of things and off they go. We go through mental gymnastics: did we breathe too hard, were we not low enough in our blinds . . .  so on and so on?

But others come and every shot marks a moment of someone’s expectation, someone’s satisfaction or someone’s displeasure, and some bird sudden pang of death or exultation of escape.

Nevertheless, they keep coming till the sun has taken possession of the sky. Then we gather the birds and say farewell. It’s good to be afield in these glorious days!

As we head to the cabin, gray clouds of sunset glow with red and yellow fire that burns about their purple hearts in tints of endless variety, while the dark blue outline of the prairie ridge kindles the last brilliance of the departing sun, fading in a tint of tender green to the upper blue, and the eastern hills blush magenta against the climbing, darkening shadow of the earth.

That night we gather in the restful cabin and enjoy its comfort over our pipes and the affairs of our missing friends. At times, the drafty little stove stops its fluttering mumble as if holding its breath to listen to the banter. Then it continues its roar as if the matter was too trivial for its attention.

Ultimately, departure day comes and the words are voiced which no one wants to hear: “It’s time to depart for the hectic events of life.”

I welcome the wonder of transformation–the days of spring and summer and autumn to come and in them, I hope, will find comfort as I wander into memories permanently stored in my mind, while wrapped in late winter sleep with dreams of another hunting season.

To most, all seasons are nice, all days enjoyable, wherein one might follow his pastime, though downpours may besiege you, cold winds freeze you, or the summer sun showers upon you its most penetrating rays. Nevertheless, in Autumn one finds their full measure of content and happiness. Those days and nights will live on forever. They will not be overlooked in a moment nor forgotten in the memory of all who go to the Autumn countryside when the forests are clothed in vivid colors and the fields and prairies are enchanting with soft blue skies and sun. It is Autumn when the geese tells us that Fall is here. It is Autumn which fills our heart with cheer!