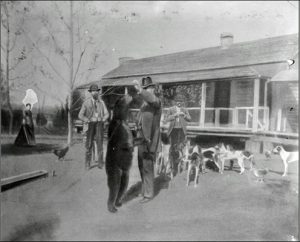 Robert Bobo feeding his pet bear which he used to train his bear dogs, while some of his bear dogs are pictured also.

Don’t you wish you could sometimes step back in time and hunt with some of the old-timers? If you are like me, you do. I would have stepped off that platform at Bobo, Mississippi, and gone on a bear hunt with Robert E. Bobo. “The champion bear hunter of the world,” many said prudently, and after deliberation they said “he had killed twice as many bears as any other man.”

He was one of the old frontier type—powerful, hardy looking with a florid complexion, long sweeping, sandy moustache, and a cold-blue shooting eye. Most Mississippians were slim and tall, but his physique reminded one of a bear. In character, he fulfilled his type—headstrong, impetuous, powerful, crashing through things, not going around them.

His father came to Mississippi from South Carolina “before the Wah.” It is said they brought with them a hogshead of dressed turkeys, cooking and eating one each day. Robert was the first white child born in 1847 in Coahoma County, Mississippi. Twenty-five years after the “Wah,” while on a hunting trip, Robert ventured in a dugout upon Anise Ridge, in what is called the Delta country, about eighty miles below Memphis. An overflow was on and all the high ridges, like Anise Ridge, which never flooded, were covered with game—“bars thicker’n dan rabbits.” Hunting about 15 minutes, he had to stop, for his boat was filled to capacity with bears. He said then that he would own the ridge some day.

The next year he returned. At that time, all the ground was covered with blue cane, as thick as the hairs on a man’s forearm. He purchased 600 acres for two dollars and acre, and the act of redemption began. Soon cotton, corn, and potatoes were growing on the richest soil on earth. The plantation house was long, low, and wide; one storied, with wide galleries all about it, a typical plantation house. On every side were the outbuildings, smokehouses, barns, and storerooms.

I can see Bobo now walking into that house and taking down his hunting horn. “I will show you a few dogs,” he would say. Blowing his call long and loud brought a confusion of tongues, as the bear pack came running in from every direction, and from every sort of place. From under the house, out of the house, and behind the house, and from the barns and the sheds and from across the fields, the hounds came galloping in dozens, until the yard was full of howling and jumping dogs—eighty of them. The base of his pack was the old pack of foxhounds his father brought from North Carolina. He was obliged to have a great many dogs, for the life of a bear dog was only about four years, but full of action, and not all dogs made good bear dogs. He was continually training and trying and selecting. If a dog in training ran anything but a bear it was given a “half beating.” If he is afraid to run the bear, a killing is in order. The bravest dog gets the bear’s liver to eat after the kill.

And no good bear dog would run anything else! He said, “I like a cross of staghound pretty well; such dogs usually will run a bear trail. Then we have half-breed curs which do well, too. We never dare let go of the cold foxhound nose though, for that must puzzle out the faint trails. Plenty of cold-nosed dogs will not run on a bear trail, and some cold ones will run deer, or cat, or coons or such stuff, none of which we want.” He often hunted with about 53 hounds in his pack and often had to send the train to go and pick up more dogs at his home place because many would get “crewed up” by the bears, while many were crippled and lamed and a few would be killed. The life of a bear dog was short, killed on the field of honor.

The first week after he settled on the ridge, he killed 13 bears with “Nels” Harris, who later became sheriff. On another hunt, the two brought in nine, all large ones. In one hunt of five days, he killed 2,100 pounds of meat. The largest number he ever killed in one year was 304 in 1869 by his parties, “whites and blacks,” who followed the dogs. During that same year, he also killed 52 deer and 13 panthers. He remarked, “You could kill bears then like hogs.”

Although he kept records for some years, the records were burned along with his dwelling. How many bears he killed in all, he could not recollect, but many hundreds. In one day, he killed seven and six the day following, and very often three or four in a day. Once in three days, he killed fourteen, three, and six. He killed ten in eight days. One year, he and his hunting companion, Felix Payne, who kept some of Bobo’s dogs, jumped 151 bears and killed everyone before they made a loss in 1884. In 1891, he killed nine bears in five days during the Christmas holidays. In 1896, his group killed eight bears in six days. One bear weighed over 500 pounds and had killed one hound and crippled five more. Bobo and his friend, John Holmes Sherard, killed 225 bears during one year between Bobo plantation and the Sherard plantation.

He always used a .44-70-caliber Winchester lever action carbine. The hunters stayed on the hunts sometimes for weeks. Four mules were required to pull each wagon, loaded down with provisions and servants. They feasted on roast, steak, and stew made out of bear meat. He never wasted any meat nor sold any meat or hides but once when there was a lot of bear hides around the place, and a peddler came along and offered him $3 a piece for the lot. He gathered up 180 in all, and Bobo let him have them.

These stories are not to be doubted, for he equaled or better all of Davy Crockett’s records for killing bears. He received hundreds of letters from most of the countries in Europe and from all over the United States asking if they could come hunt with him. By 1895, Bobo’s bear hunting territory had been inundated with outsiders from multiple states after receiving numerous write-ups in sporting journals and newspaper. So much so that he had to venture into a new hunting territory, further down than his home place in Coahoma County.

Moreover, the bear population began to decline because bears won’t breed if they are disturbed and troubled, which is always the case with big game when harassed. To make matters worse for Bobo, his hunting companion for many years, Felix Payne, died in 1895.

I can see him now riding through the canebrakes like a wild bull of Borneo broken loose. Many men thought they could follow Bobo through the blue cane, but no man ever did.

More spirited hunting scenes would be hard to find than those presented in the heart of the great Sunflower River wilderness during the olden days, and I believe that the artist who could paint it would achieve a lasting fame. Bobo’s bear hunts even provided the material for a novel, The Law of the Land by Emerson Hough, which was published in 1904. Such was the environment then back in the olden and golden days. Hough was the outdoor writer for the old Forest and Stream sporting journal.

He was asked to host a bear hunt for President Theodore Roosevelt in 1902, but he couldn’t because he was out hunting with friends from Chicago near Centennial Lake near Clarksdale. However, he received a message that “President Theodore Roosevelt is hunting bear 70 miles south of your camp and hopes that you will join him and lend your aid.” Bobo responded, “I have guests here with me from Chicago, I cannot leave. If the President will come here, I will guarantee that he’ll kill a bear.” The Hattiesburg Progress proposed that “a portriat of ‘Bob’ Bobo, the famous bear hunter, be hung up in Dunbar Rolwand’s so-called temple of fame. He is as much entitled to the distinction probably as some others.” Rolwand wrote biographical accounts of the state’s businessmen and politicians.”

In December 1902, he died at a Chicago hospital during emergency surgery for treatment of cancer of the eye. His son, Fincher, never hunted bears again after his father’s death. His famous bear-dog kennels were purchased by the legendary bird-dog trainer and handler James Avent, who was also a big-time bear hunter and owned many bear dogs himself. Avent also managed the famous bird-dog kennels of Herman Duryea, Harry Whitney Payne, and other New York millionaires at Hickory Valley, Tennessee.

By the mid-1850s, bear hunting in Mississippi had changed from subsistence hunting to sports hunting. Black bears population, by the early 1900s, had declined due to habitat loss and overharvest to 12 bears. Mississippi closed black bear hunting in 1932.