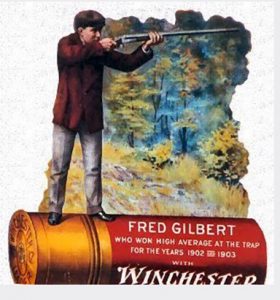 The Old timers of Memphis duck hunting clubs were a cantankerous bunch. Take the dinner served to Fred Gilbert, famous trap and duck shooter from Spirit Lake, Iowa, and known by the sobriquet of “Wizard of Spirit Lake,” when he was invited to hunt with the Wapanocca Outing Club during the winter of 1905, located just across the Mississippi River at Turrell, Arkansas.

Sipping a little Tennessee whiskey at the fireplace just before dinner, they were all in a jovial mood. The members had the club’s black chef, “Uncle Phil,” cook up some mallards for the dinner table one night after a day of successful hunting. Dinner was called and each took their place, with Fred at the head of the table. It was said at the dinner table by the hosting member of Fred, “Fred is a mighty trap shooter. When the American team was selected to tour England and Scotland in 1901, Gilbert—who had 10 runs of 100 straight that year, was named to the team. This year, he broke 392 straight targets over a period of three consecutive days at his home grounds. During one six-day stretch he broke 1,178 of 1,200 targets for a .9812 average.”

A few toast were given, after which the host continued, “It is with ecstatic enthusiasm that I tell you that Fred is also a mighty  duck hunter, so much so that he is growing web toes and can quack exactly like a duck. He lives on ducks during the fall and winter months. Most of you probably don’t know that he is one of the early members of the original Okoboji Indians and was known among that tribe of scattergunners as “Chief Heap Talk,” but we will try and keep everything we say and do here tonight respectful in honor of our guest.”

Each was served with a whole duck to carve up for their dinner. Each was covered with gravy and looked brown and juicy. As each carved away, Fred took up his carving knife and started in. He made an attempt to whittle a slice from the breast, but the knife only slipped over the surface. He looked around and saw that everyone was eating away at their mallard, smothered in brown gravy. So he tried to amputate a hind leg, but could only make his mark. He then sawed on one side, then on the other, but got the same results.

At last, looking up befuddled, he squawked out, “Say, look-a-here, I’ve killed lots of ducks and eaten ’em, but this is the gol-darned toughest duck I ever saw !”

It was all the members could to do to stay in their chair as they were roaring with laughter. It was then that Fred knew the joke was on him. The president of the club, once he recovered from his belly laughing, confessed, “Fred, we had a special leather duck made up for you by one of our best taxidermists. I swear once it was covered with gravy one couldn’t tell it from the real deal.”